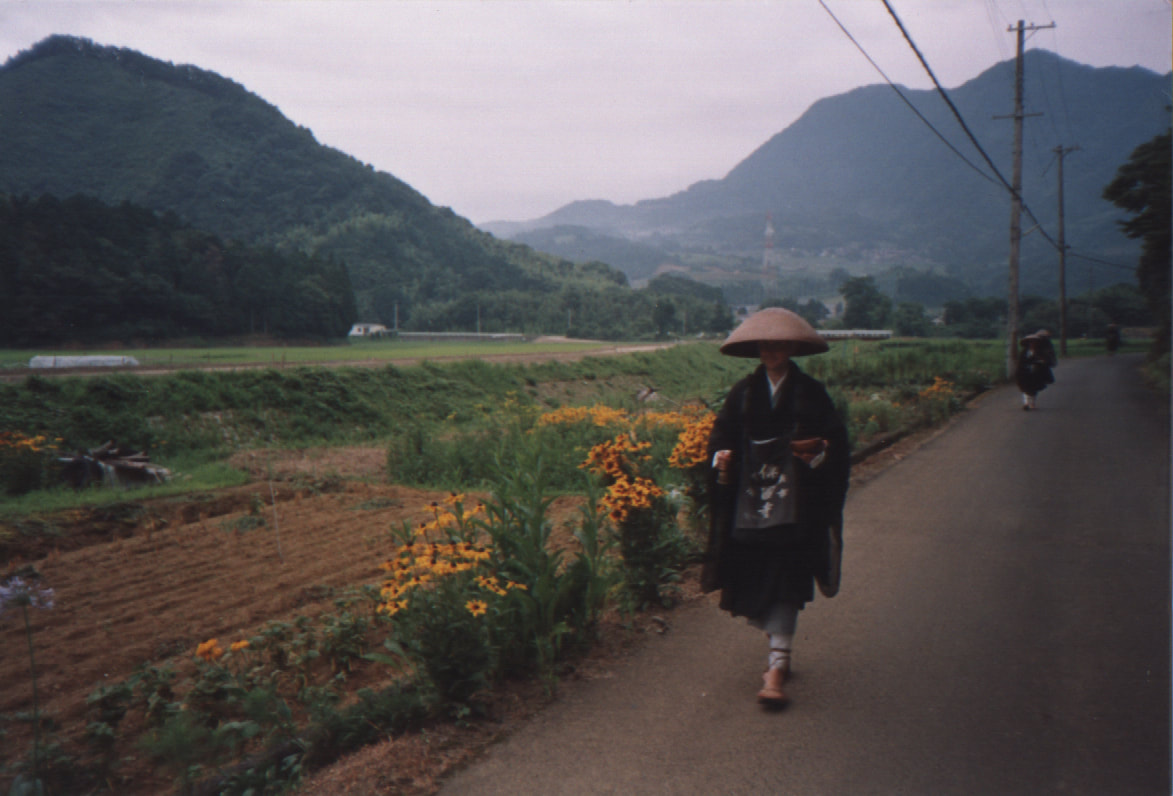 Kokyo doing takuhatsu (alms collecting) in Japan
From the beginning, Zen Buddhism has been known as a “separate transmission outside the scriptures, not based on written words, pointing directly to the human mind, seeing true nature and becoming buddha.” However, the Zen ancestors were also thoroughly steeped in the traditional teachings of Buddha-Dharma that guide people to awakening from entrapment in false beliefs about themselves and the world, teachings for relieving the discontent that arises from dualistic projections. Especially in the modern age, when Buddha-Dharma is still just beginning to take root in the West, it is essential for all sincere practitioners to understand the basic principles of practice and realization that have been passed down for centuries.

For those vowing to enter and study all Dharma gates as skillful means to assist in the liberation of all beings, it is also necessary to deeply understand the profound and subtle teachings of the Mahayana, the Great Vehicle of Bodhisattvas, including the views of Mind-Only, the Middle-Way of emptiness, and Buddha-Nature, which form the basis for the Zen tradition. Though intellectual study of the words of the ancient realized ones is certainly not the same as their direct realization, some would say that it is virtually impossible to realize what they did without such thorough and far-reaching study, to unravel our most deeply held false assumptions.

Dogen Zenji, the founder of the Soto Zen lineage in Japan wrote: "An ancient buddha said that a painting of a rice cake does not satisfy hunger... However, to think this statement means that skillful teachings are useless is a great mistake... There is no remedy for satisfying hunger other than paintings of rice cakes. Without painted hunger you never become a true person."

Rev. Kokyo Henkel has long been interested in exploring how the classic teachings of Buddha-Dharma from ancient India, China, and Japan can still be very much alive and useful here and now, to bring peace and openness to the minds and hearts of this troubled world. This website offers Kokyo's line-by-line commentaries on many of these classic texts, which are often difficult to fully appreciate and understand without commentary.

Kokyo has been practicing Zen Buddhism since 1990 in residence at Tassajara Zen Mountain Center, Green Gulch Farm Zen Center, and No Abode Hermitage - all in the Soto Zen lineage of Shunryu Suzuki Roshi - and Bukkokuji Monastery in Japan (with Harada Tangen Roshi). After living in these monastic communities for almost two decades, Kokyo was then head teacher at Santa Cruz Zen Center from 2010-2017, and will be studying and practicing with no fixed abode along with his wife, Rev. Shoho Kuebast, beginning in 2020.

Kokyo was ordained as a Zen priest in 1994 by Tenshin Reb Anderson Roshi, receiving the Dharma name Kokyo Yakai (Luminous Owl, Midnight Liberation 光梟夜解). He received Dharma Transmission from Tenshin Roshi in 2010, becoming a lineage-holder authorized to guide others on the path. Kokyo has also been practicing with the Tibetan Dzogchen (“Great Perfection”) Teacher Tsoknyi Rinpoche since 2003, in California, Colorado, and Kathmandu.

May all those who encounter the teachings of the Buddhas and Zen Ancestors be filled with boundless freedom and joy, finding no edges in the vast ocean of eternal brightness!
donations
"Alms and Dharma both given, unsurpassed merit and virtue - the perfection of generosity completely fulfilled."
(Zen verse traditionally recited when receiving donations)

Kokyo is supported only by offerings, entrusting his life to the generosity of others.